This week at the Curious Minds Club we explored Borromean and Brunnian links.  We started with the Borromean rings as they are the simplest Brunnian link. I showed the children how to turn coloured pipe cleaners into circles. They made a red one and a white one, then placed the white on top of the red one and threaded a blue one through, in an over-under-over-under sequence. I showed the children that as a ring of three this is a strong link, but if you remove any one ring the whole thing falls apart.

I asked the children to turn their flat ring into a three-dimensional structure, almost like a gryoscope.

A drew a table to show that each ring is outside one ring and inside another ring.

I surprised the children by asking them how their Borromean ring is like the game ‘Rock, Paper, Scissors’. One girl was able to identify that each component has a different relationship with the other two components. I drew the table below and pointed out that white occupies the same positions in the table as rock; that blue corresponds to paper; and that red corresponds to scissors. I explained that the concept of ‘beating’ equates to being ‘outside’ and the concept of ‘losing to’ equates to being ‘inside’.

Some children had raced a bit ahead, so I asked them to make triangles instead of circles and thread them into a ring. I showed them one I had made earlier. Two children thought the circles made a better three dimensional shape, but one boy argued in favour of his triangles. He had indeed succeeded in making something harmonious to look at.

The final task was a make a 4 component Brunnian link, with four different coloured pipe cleaners. This is trickier than the Borromean rings as the green link has to be made much smaller, but the threading is not too complicated. With a little assistance the children were able to complete theirs. I asked what would happen if one link was removed. Due to the effort involved in making it some of the children were reluctant to try this on theirs! I let them use my demo instead, and they were surprised to see the whole thing fall apart. I explained that as this happens with the Borromean rings we should expect it with the Brunnian link as they are part of the same class of links.

Here are some photos of the children’s work. 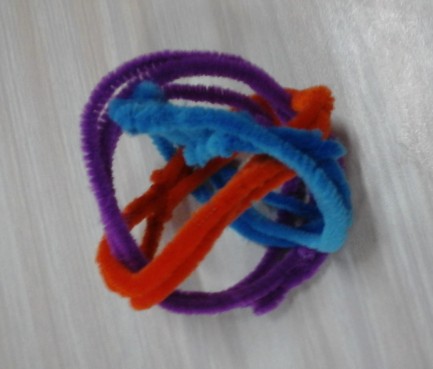 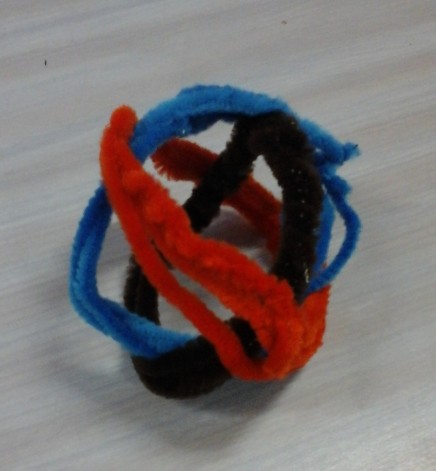 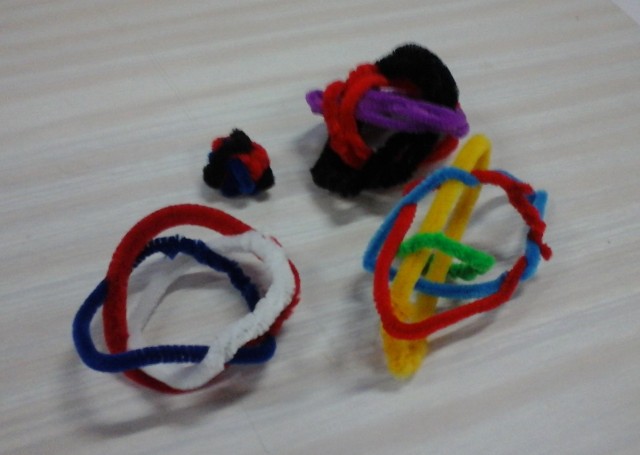