In our final week of this term at the Curious Minds Club we explored how to solve a maze. A maze is a type of topological puzzle. I showed the children a method of solving a maze by shading in all the dead ends: a dead end is chosen and shaded back to a point where a decision has to be made; at this point no further shading can be done so another dead end is chosen and the shading repeated. When no further dead ends can be found what remains is the solution to the maze. The children explored this method using some Christmas mazes I found online.

Last week we explored Borromean and Brunnian links. There was one activity we ran out of time for, so I brought it this week. Professor Tadashi Tokieda calls this a Borromean ribbon. His Numberphile You Tube video gives a great visual demonstration.

I tied some strips of ribbon into closed loops and showed the children how to set them up on one hand. The children soon got to grips with how to pull one ribbon down and come up with a surprising result.

The final activity was a make a Mobius paper chain to take home. I told the children we could have made regular Christmas paper chains, but they are boring. So much better to remember the session we did a few weeks ago on the Mobius loop. I had cut strips out of Christmas themed paper and reminded the children of the twist which produces the Mobius loop. The children then got to work, threading, twisting and taping. Here are some examples:

This week at the Curious Minds Club we explored Borromean and Brunnian links.  We started with the Borromean rings as they are the simplest Brunnian link. I showed the children how to turn coloured pipe cleaners into circles. They made a red one and a white one, then placed the white on top of the red one and threaded a blue one through, in an over-under-over-under sequence. I showed the children that as a ring of three this is a strong link, but if you remove any one ring the whole thing falls apart. 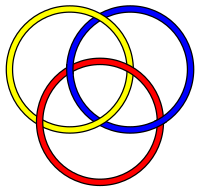 I asked the children to turn their flat ring into a three-dimensional structure, almost like a gryoscope.

A drew a table to show that each ring is outside one ring and inside another ring.

I surprised the children by asking them how their Borromean ring is like the game ‘Rock, Paper, Scissors’. One girl was able to identify that each component has a different relationship with the other two components. I drew the table below and pointed out that white occupies the same positions in the table as rock; that blue corresponds to paper; and that red corresponds to scissors. I explained that the concept of ‘beating’ equates to being ‘outside’ and the concept of ‘losing to’ equates to being ‘inside’.

Some children had raced a bit ahead, so I asked them to make triangles instead of circles and thread them into a ring. I showed them one I had made earlier. Two children thought the circles made a better three dimensional shape, but one boy argued in favour of his triangles. He had indeed succeeded in making something harmonious to look at.

The final task was a make a 4 component Brunnian link, with four different coloured pipe cleaners. This is trickier than the Borromean rings as the green link has to be made much smaller, but the threading is not too complicated. With a little assistance the children were able to complete theirs. I asked what would happen if one link was removed. Due to the effort involved in making it some of the children were reluctant to try this on theirs! I let them use my demo instead, and they were surprised to see the whole thing fall apart. I explained that as this happens with the Borromean rings we should expect it with the Brunnian link as they are part of the same class of links.

Here are some photos of the children’s work. 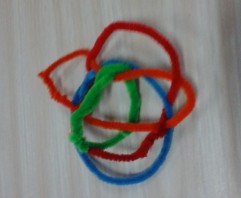 The children then followed a set of drawings I had made, each one getting progressively harder and involving adding in one rubber band, then two rubber bands, then changing the positions of the bands along the strip of paper. The results were a combination of the paperclips and rubber bands being linked together in lots of different ways, some falling off the paper and some staying on. Some children made it to drawing 10, which results in an amazing Borromean link!

If you want to see how the paperclips become linked together, here is a slow motion video:

This is what the table looked like at the end! Lots of mess and lots of fun. 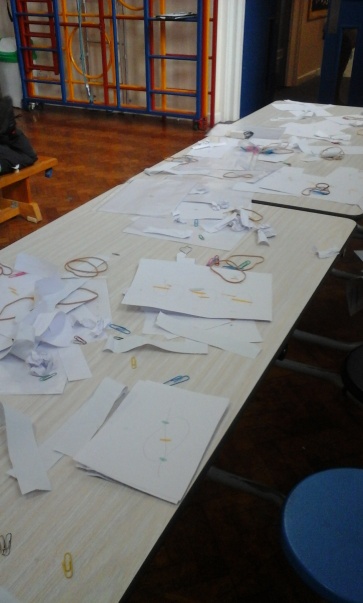 An investigation of that classic problem in topology, the Three Utilities Problem. The children made their first attempt in flat, two-dimensional space i.e. on a mini whiteboard, so they could rub out their attempts and keep trying. After a few minutes I explained that the problem cannot be solved in two-dimensional space as there is not enough space! I asked the children what we could do in this case, and one boy was very quick to suggest trying it in three-dimensional space.

I produced four big tori, in the form of an inflated swim ring which I had wrapped in white duck tape and labelled, so that the dry wipe markers could be used and rubbed off as needed. After a few attempts, and some hints from me that they needed to use the whole length and circumference of the torus, we had some correct solutions.

I then reminded the children that a torus is topologically equivalent to a coffee mug, and that if they could solve this problem on a torus they could also solve it on a mug. I then produced four white mugs which I had labelled. The dry wipe markers rub off very easily on a mug. The children spent the rest of the session exploring how to solve the problem. They needed a few hints about using the handle and the base, and going under the handle, but most of them got there in the end. The children seemed to really enjoying solving the problem using such unusual materials.

We explored the Mobius loop in this week’s Curious Minds Club. The children made a straight loop and drew lines around the centre of the paper strip on the inside and the outside to prove the loop has two faces. They did the same along the edges to prove the loop has two edges. I showed they how to introduce a half twist, and how this changes the property of the new Mobius loop to only having one face and one edge.

The children cut the Mobius loop along its centre line to show that it does not fall into two pieces as expected, but becomes a loop with four half twists. I asked the children to predict what would happen if they cut a Mobius loop one third of the way in: some predicted two loops, and some predicted one twisted loop. They made the cut and were surprised to make two connected loops, one Mobius and one non-Mobius.