This week at the Curious Minds Club we built the final two Platonic Solids, the Dodecahedron and the Isocahedron.

We used the same materials as last week: Polydron Frameworks and generic Geomag. For the Dodecahedron I did not give the children a model to copy: I gave them 12 Polydron pentagons and said there were three around every vertex. They were able to figure it out for themselves, which I was impressed by. I don’t think this would have been possible without the previous three sessions on two and three dimensional objects.

It is impossible to build the Dodecahedron using the generic Geomag as there is too much freedom in how the rods can move around. Instead we went on to the Icosahedron. I had drawn instructions for this, based on making two identical caps then adding 10 rods around the outside of one cap (two on each vertex), then fitting the two pieces together. With a little help from me, but only at the final step, the children were able to make their Icosahedron: 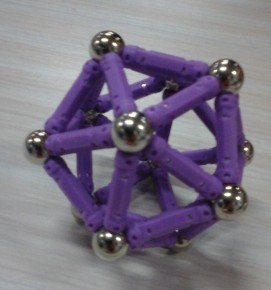 The children then moved on to using some Polydron equilateral triangles to make more Icosahedra. They did require some help to make sure there were five triangles at every vertex. See how I have captured two different views in this photo, the second one really bringing out the vertex. (I will admit this was not on purpose).

Here is the whole set of five Platonic Solids, from last week and this week:

I explained to a Y6 girl why there are only five of these that meet the criteria of being regular, convex polyhedra. I put three triangles around a vertex, pointed out the gap in this net, then asked the girl to snap them together. This is the start of the Tetrahedron. We repeated this with four around a vertex, then five. The gap in the net got smaller, giving less height to the cap. Putting six around a vertex leaves no gap in the net: it is two dimensional and cannot make a polyhedron. We then took a look at putting seven around a vertex. I explained that this was a hyperbolic surface. The girl was inspired to see that would happen with eight, nine and then ten around a vertex. The results of 10 are below. I have promised to bring this back next week to continue this exploration of space.